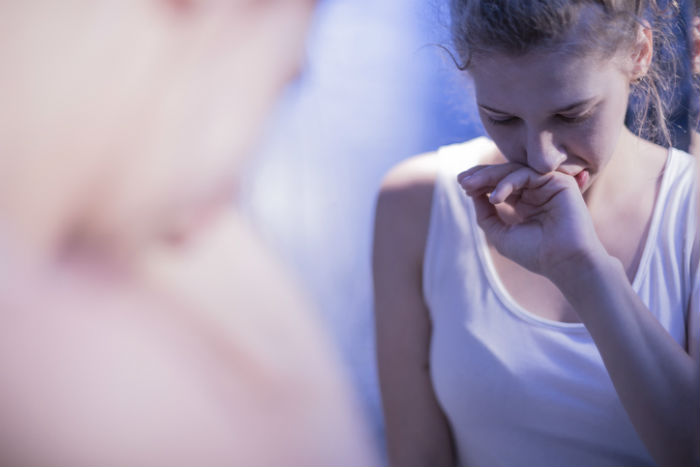 My best friends and I have taken a beach vacation in New Jersey for the past 2 years.

We spend a week together gallivanting on a boat and day drink spiked sparkling waters. We stay in a rustic cabin in very close quarters, but it’s always an amazing and very relaxing time.

This year, though, there was an unexpected element of stress added to our week on the ocean.

My one friend, Cassandra*, had been complaining about an issue she’d had with her stomach, how every morning she wakes up feeling very nauseous and would even throw up sometimes. My other friend, Jillian*, and I had no reason not to believe her.

On the second day of our trip we were all sitting at the breakfast table wolfing down pancakes and fruit before a day on the boat. Cassandra picked at her food and moved it around her plate but ate notably less than she has been known to in the past.

As a lifetime athlete and lover of food, Cassandra used to always eat well. She quietly got up from the table and disposed of the rest of the food on her plate. She then went right to the bathroom.

At first I didn’t think anything of it. I hadn’t really even noticed. But then Jillian got my attention and whispered, “I think she’s been throwing up.” When I thought about it, it made sense.  I said, “But doesn’t she have that stomach problem?” Jillian speculated, “It’s after every time she eats, though.”

Cassandra was the last person I’d every suspect of doing something like this. She always cared about her health, and loved to work out and work on being healthy. But as the week went on, Jillian and I began to notice more and more clues and began to fit the pieces together.

We began to realize that she would constantly make an excuse as to why she was going to the bathroom so much. She would say she needed to wash her hands or that something didn’t sit right or just that her stomach felt ill from the “issues” she had noted before.

But we noticed that she went to the bathroom after every thing she put in her body. And it wasn’t hard to hear the choking going on behind that door.

Throughout the week, Cassandra would talk to Jillian and I about her roommates and how they were both so effortlessly thin.

That was another piece of the puzzle that seemed to explain why she would be doing this. We also noticed how much weight she had lost since the last time we had seen her.

She was the thinnest she’d ever been in the 10 years we’ve known her and she seemed to lose all the weight—what looked like 15 pounds—in about one month.

Jillian and I had no idea what to do.

We didn’t think confronting her would be a good idea because it was clear that she would deny it or blame it on her stomach issues she mentioned constantly.

We also didn’t know if she even admitted it to herself yet. She was proud of her weight loss, but noted that she hadn’t been working out. It was all due to her inexplicable stomach issues.

We thought about telling her parents. Just to warn them to keep an eye on her because the signs were pretty obvious that she had been forcing herself to vomit after eating. But at the time, she was not living with her parents. She was living at school, working and taking classes for the summer.

So we left the problem in the hands of the doctor’s appointment she had set up for her stomach issues, trusting that a doctor will know better how to handle the situation that we do.

She is now going for tests to determine what is wrong and Jillian and I are constantly asking for updates. If the doctors do not uncover anything and we notice it is still happening, we plan to take action and go to her parents, because an eating disorder is not something that should be ignored.

*names have been changed